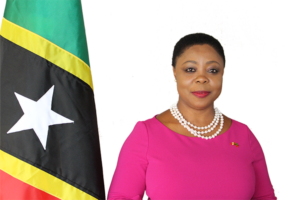 Sherry Tross was appointed as the High Commissioner of St. Kitts and Nevis to Canada in February 2018. Previously, she held senior positions with the Organization of American States (OAS) in Washington, DC. From 2012-2015, she simultaneously served as head of the OAS Secretariat for Integral Development and Director General of the Inter-American Agency for Cooperation and Development, becoming the first woman in the organization’s history to do so. Ms. Tross directed the Summits of the Americas Secretariat (2010-2012) for the Sixth Summit of the Americas in Cartagena, Colombia. She also served for several years as Chief of Staff and senior political advisor to the Assistant Secretary General of the Organization of American States (2005-2010). In 2015, she founded and directed the organization’s Office of Ombudsman, establishing new conflict resolution mechanisms for the organization.

Before joining the OAS, Ms. Tross served as Director of Business Development at the World Trade Center Miami (2003-2005), working with city and state agencies as well as the private sector to create business opportunities and promote international trade. A founding Research Fellow for the University of Miami’s Caribbean Program (1992-1994), Ms. Tross was subsequently appointed Program Director of the University of Miami’s North-South research center and implemented a range of programs in support of security and sustainable development in the Americas (1994-2003). Ms. Tross is a recipient of the United Nations South-South Cooperation Award and the Women in Leadership award from the Inter-American Commission of Women. In 2012, the government of Chile conferred on her the Order of Bernardo O’Higgins. Ms. Tross holds a B.A. in Spanish from Hamilton College, New York and an M.A. in International Relations from the University of Miami.

SKN Through Their Eyes

Register with the High Commission: